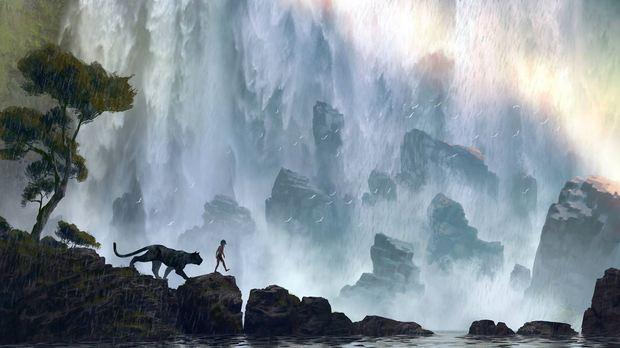 The last film made under Walt Disney’s guiding eye, the 1967 “The Jungle Book” was full of jazzy songs, funny characters, and an innocent, gee-whiz joy.

The most recent corporate remake has a little of the humor, less of the music and a hunger for violent spectacle.

It’s hard to see this as any kind of improvement.

Trading in old-school animation for high-tech effects, the movie casts little Neel Sethi as the orphaned Mowgli, and then surrounds him with the computer-generated wolves who raised him.

Also the sleepy bear who befriends him, the giant baboon who wants to use him, and the villainous tiger who wants to kill him.

The story is as sturdy as it was in Kipling’s time, and Sethi is unspoiled and easy to take. Still, it’s hard to simply sit back and enjoy when that’s a real kid on screen, being menaced by a real-looking Bengal tiger.

And director Jon Favreau handles everything like he’s still making one of his Marvel movies. Several animals get killed, Mowgli is often inches away from being eaten, a wildfire rages out of control – for a movie supposedly aimed at small children, its real aim seems to be to terrorize them.

The voice casting, at least, is very smart. The rumbling Idris Elba makes a good, nasty Shere Khan the tiger, and Bill Murray is all sleepy, stoner mumbles as Baloo the bear. Scarlett Johansson briefly impresses as Kaa the snake, but disappears too soon.

True, it’s difficult to say exactly. What. Christopher Walken is doing as. King Louie the baboon, but what else is new? In a movie crowded with high-tech special effects, his stop-and-go line readings remain the most inexplicable effect of all.

To be fair, the new “The Jungle Book” is a fine looking movie. The animals all look great (even if the scale is sometimes wildly off – King Louie the baboon is the size of King Kong). Their interaction with Sethi is seamless, and the story movies briskly – sometimes too briskly – along.

But there’s something missing here, and it’s something Walt Disney never would have left out. And that’s the innocence. The sense of wonder. And the magic.